5 Patient Assessment Skills You Need To Know To Crush The TMC-RRT Exam!
by
Respiratory Therapy Programs

Physical exam involves observing, palpating, percussing, and auscultating the patient. All of these methods reveal clues to the source of the patient’s problems. Physical exam clues are included in a large majority of questions on the board exams. Knowing physical exam terminology and how it relates to your patient will serve you well on the TMC-RRT exam.
Palpation
Palpation involves putting your hands on the patient to measure chest expansion, palpate for tactile fremitus, and assess for tracheal deviation.

4. Flail chest is caused by severe chest wall trauma such as multiple broken ribs. Flail chest causes paradoxical motion of the affected side as compared to the normal side of the chest.

5. Seesaw movement of the abdomen and chest occurs when the diaphragm fatigues such as often occurs with paralyzed patient’s. This should not be confused with flail chest.

Decreased chest expansion may be due to neuromuscular diseases or the result of an already hyperinflated chest due to COPD.
B. Tactile Fremitus
Fremitus is another word for vibrations. Vibrations from the patient’s speech are known as vocal fremitus. When the clinician feels the vibrations with their hands while the patient speaks, the vibrations become known as tactile fremitus. The clinician describes the vibrations as increased, decreased, or absent. Vibrations are transmitted better through consolidated lungs than clear lungs.
Increased fremitus is associated with:
1. Pneumonia
2. Lung tumors
3. Atelectasis
Decreased fremitus is associated with:
1. COPD
2. Pneumothorax
3. Pleural effusion
4. Obese or very muscular patients
Rhoncial fremitus is associated with secretions and can usually be cleared with a cough.
C. Tracheal Deviation
Understanding which direction the trachea shifts in patients with pneumonia, pleural effusion, pneumothorax, or atelectasis will greatly increase your chances of passing the board exams. Fortunately, there are two simple things to remember that will help you determine what is causing the trachea to shift.
1. Lung problems outside the lung, such as pleural effusions or pneumothorax, push the trachea away
2. Lung problems inside the lung, such as pneumonia or atelectasis, pull the trachea towards them.

Normal chest percussion produces an easily heard low-pitched sound when percussed. This is known as resonant.

Abnormal chest percussion
Dull or decreased resonance occurs when the density in or around the lung increases. Common causes include:

1. Pleural effusion
2. Pneumonia
3. Atelectasis
Hyperresonant lungs produce a loud, hollow sound when percussed. This occurs as a result of excessive air trapped in the lung or pleural space. Common causes include:

Causes of diminished breath sounds may include:

Adventitious breath sounds
Adventitious breath sounds are abnormal added or extra sounds superimposed over normal breath sounds during auscultation of the lungs.
1. Wheeze is a continuous high-pitched sound.
2. Asthma – If due to asthma wheezing should be bilateral. There is no such thing as unilateral asthma. Recommend aerosolized albuterol if wheezing is bilateral and asthma is suspected. If breath sounds change from wheezing to markedly diminished after receiving aerosolized albuterol, the patient is getting worse and needs more aggressive therapy. Recommend a continuous nebulizer with a higher dose of albuterol.
3. Foreign body airway obstruction – Unilateral wheezing is highly suspicious for foreign body airway obstruction, particularly in a child. Unilateral wheezing caused by foreign body aspiration can be treated with rigid bronchoscopy. Of course, if the patient shows signs of hypoxemia you must remember your priorities and give oxygen first.
4. Fine crackles are most often due to pulmonary edema and atelectasis. Fine crackles cannot be cleared with suctioning. For patients with fine crackles due to CHF/pulmonary edema recommend: oxygen, diuretics such as Furosemide or Lasix, and positive inotropic agents.
5. Coarse crackles occur when secretions move in the airways due to pneumonia or bronchitis. Coarse crackles due to secretions are heard on both inhalation and exhalation. Recommend coughing and/or suctioning for patients with coarse crackles.
6. Stridor is a serious sign of airway obstruction. This can be due to foreign body airway obstruction, post extubation edema, or croup. Stridor is audible mostly during inspiration. Treatment of stridor depends on its severity:
a. Mild/moderate stridor – If stridor is only moderate and the patient is stable, you will have time to treat it without intubation. Recommend oxygen, racemic epinephrine, rigid bronchoscopy if foreign body airway obstruction.
b. Severe stridor – Severe stridor often occurs in patients with epiglottitis. Severe stridor compromises both ventilation and oxygenation of the patient. Severe stridor requires immediate intervention. Therefore, recommend intubation for a patient with severe stridor.

Abnormal thoracic configurations:
1. Atrophy – both neuromuscular disease and prolonged mechanical ventilation can cause wasting away of the accessory muscles. These patients often have trouble clearing airway secretions. The therapist can recommend the patient use an in-exsufflation device to assist the patient with airway secretion clearance.
2. Hypertrophy – patients with severe COPD rely on these muscles to breathe even while at rest. This is due to the loss of elastic recoil in their lungs and displacement of the diaphragm due to air trapping. As a result, the accessory muscles of respiration become enlarged.
3. Barrel chest – Patients with severe COPD may have increased A-P diameter due to hypertrophy of accessory muscles and hyperinflation (air trapping). Think of the terminology barrel chest, air trapping, increased A-P diameter, and hyperinflation as all being synonymous with each other and also associated with COPD.

Work of breathing
Normal Work of Breathing
Patients with a normal work of breathing will have a normal respiratory rate and rhythm. The abdomen will move gently outward with inhalation and inward with exhalation. The accessory muscles of respiration will be only slightly active.

Labored or Increased Work of Breathing
Signs may include increased accessory muscle use, retractions, tracheal tugging, nasal flaring, or the patient’s subjective complaint of shortness of breath and/or dyspnea.
1. Accessory muscle use is associated with increased airway resistance and muscle fatigue. Accessory muscles include the scalene, sternocleidomastoid, pectoralis major, trapezius, and internal intercostal.
2. Retractions appear as an inward depression of the skin around the chest wall caused by forceful inspiration. Retractions can be intercostal, supraclavicular, and sternal. Retractions are a sign of severe airway obstruction and/or respiratory distress.
Click Here For 10 Free Exam Practice Questions With Thorough Explanations 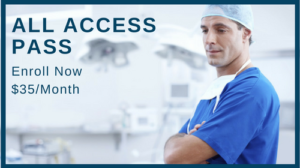